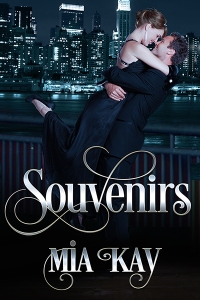 Their fellow passengers pushed past Grace in a rush to board. One businessman practically knocked her into her mother’s lap in his hurry to get to a window seat.

Hoisting the bulky bag overhead, Grace gasped as her elbows buckled. It listed backward, skewing her balance and threatening to topple onto the passenger across the aisle.

“May I help?” A deep, warm voice rumbled over her shoulder. Before she could answer, the weight of the bag disappeared and she fell against a solid chest. She gazed from large hands, up strong arms, to broad shoulders. Tilting further back, she saw a wide smile. When his hand covered hers, she jerked upright and surrendered the bag.

“Thank you,” she squeaked.

“My pleasure,” he said as he boosted the second bag overhead.

Grace sidestepped to her seat and her volunteer valet walked to the back of the plane, for all intent disappearing since Grace refused to turn and stare. Closing her eyes, she willed her blush to subside and waited for the announcements signaling takeoff for the last leg of their flight to Vienna.

The jolt of landing jerked Grace alert. As they taxied to the gate, her mother unfastened her seat belt and perched on the edge of her chair. Her purse jiggled in time to her tapping feet.

The aisle filled, resembling a blocked conveyor belt as passengers pushed and pressed, children fussed, and bags shifted and fell. Finally everyone moved. The last person in the line was her gentleman valet—tall, well-dressed, dark hair, narrow waist, and long legs. His back was as nice as his front.

Grace’s feet were leaden and her arms felt like rubber, but she managed to reach the carryon bags, walk off the plane, and trudge to baggage claim.

The buzzer rang as the carousel jerked into motion, and Grace recited her ritual, silent “find my luggage” prayer. When both large bags arrived side by side, her relief gave her the extra adrenaline necessary to lift them clear. With that hurdle cleared, she hurried to catch up as her mother reached the revolving door.

After twelve hours of artificial darkness and recycled air in planes and airports, the sunshine and light breeze was a welcome reward. However, in minutes exhaust fumes were overwhelming, perspiration trickled down her back, and weariness set in. Grace groaned in relief as a shuttle van came into view.

“Mother, why don’t you sit while I get a taxi?”

She recognized the voice from the plane. As the heat doubled under her skin, she turned toward the only other recognizable face in Vienna.

“We meet again.” She smiled as she shrugged the heavy bag onto her aching shoulder. She’d probably walk like Quasimodo for the rest of the trip.

“We do. Hello.” His response was wary. He’s probably worried I’ll end up in his lap—again.

“Which hotel, ladies?” The driver asked as he reached for their luggage.

“Are you traveling together?” the driver asked.

“No.” The answer was issued in harmonic tandem, the man’s British bass and her Southern alto.

There wasn’t another vehicle waiting, and the heat was just the other side of warm.

“How kind. Thank you.” His mother accepted the invitation.

Her stylish clothes were unwrinkled, and her sleek salt and pepper bob stopped at her jaw. She had a lovely smile, and the crinkles around her eyes suggested she used it a lot. “I’m Camille Brady and this is my son, Ben.”

At his name, he offered his hand with a silent nod. His clothing was as fresh as his mother’s. Grace felt more and more like an unmade bed, and she was sure her ponytail was crooked.

“It’s a pleasure to meet you.” Her mother stepped into the conversation gap. “I’m Charlotte Ward, but please call me Sunny. This is my daughter, Grace.”

She held her breath, worried her mother would slip. It was silly. The chance anyone would recognize her, even using her proper last name, was almost nonexistent. But after the incident last week, she wasn’t taking any chances.

“Ms. Ward?” Ben’s voice rumbled into her thoughts. He was standing by the open taxi, with his hand outstretched and a silent question in his lopsided grin and arched eyebrow. She put her fingers in his.

He sat across from her, and she tucked her feet under the seat to leave room for his long legs. The door slid closed with a muted thunk.

“You wouldn’t happen to be going on a two-week train tour, would you?” her mother asked.

“Austria, Italy, and France?” Camille countered. “What a wonderful coincidence.”

“Isn’t it? It will be nice to know a few people when we get started.”

As the women overran each other in giddy conversation, Grace almost felt guilty for not looking out the window to enjoy the sights zipping by. Almost. They’d have two days in Vienna. It wouldn’t hurt to close her eyes for a minute. Behind sunglasses, no one would notice.

“You’ve come over from the States, then?” Ben asked in a measured, quiet tone.

Lifting lids that were now almost as heavy as her luggage, Grace saw him waiting on an answer. At least he was facing her while his sunglasses shielded his eyes, so she assumed he’d directed the question at her. “Yes. We left Chicago yesterday.”

Ben’s grin stretched his face. “But you’re not from there. I’ve traveled in the U.S. so I recognize the accent.”

Grace relaxed and returned the smile. She’d worked for years to rid herself of her telltale drawl, but it returned when she was with her mother. Sunny embraced her Southernness as if it were a near relation.

“You’ve found us out.” She forced her spine straight. “Where have you been in the States?”

“Were you there for pleasure or for business?”

The simple question was on the tip of her tongue. What do you do? It always led to the parenthetical what about you? And it went downhill from there. People couldn’t help their curiosity, but she could help hers. “And you were in Chicago?”

“Umm . . . yes. I spent an extra night there during an unscheduled layover.”

“I hope you made it to the Field Museum.”

“I did, and to the lake shore. It’s odd to stand on a beach and have the skyline that close.”

“For me it’s standing on the beach and being cold,” she agreed. “After years of flying through Chicago, I finally planned a long layover so I could sightsee.”

“The museum is your favorite?”

“The T-Rex is incredible. Can you imagine being on a hunting trip and running into that?” Her imagination hijacked her tongue. “What would you do?”

His lips twitched. “Am I hungry?”

“You live on roots and berries and the monster is between you and a prehistoric bunny,” she used her hands to gauge the size of the creature, “this big. Fight or flight?”