Wounded FBI agent Gray Harper will honor his dead partner by returning to work—as soon as the Bureau shrink clears him for duty. In the meantime, a long vacation in his best friend’s hometown sounds like the perfect distraction. But Nate Mathis has another plan. His twin sister, Maggie, has a stalker, and Gray’s the only one Nate trusts to catch the bastard.

Admitting she’s scared would bring the cavalry, and Maggie Mathis has always taken care of herself. She certainly doesn’t need a bodyguard. As far as she knows, Gray’s in town to work as the Mathis family’s new business manager. That she’s always found her brother’s friend handsome is something she’ll keep to herself.

All too soon, the line between responsibility and pleasure blurs. Gray hates to think of Maggie in danger. He hates that he thinks about Maggie too much, and of the day he won’t be there to protect her. Secrets aren’t easy to keep from those you love, but Gray needs to guard several with his life…before he risks losing Maggie forever.

One Night with a Cowboy 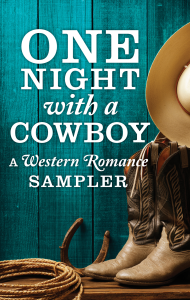 I’m honored to be included in One Night With a Cowboy: A Western Romance Sampler from HQN Books.  The other authors are Linda Lael Miller, Diana Palmer, Maisey Yates, Jodi Thomas, Trish Milburn, B.J. Daniels, Delores Fossen, Linda Warren, and Lindsay McKenna.  You can get a glimpse at ten different stories, including my next book in the Agents Undercover series – Hard Silence.

One Night With a Cowboy is FREE and will be available on March 1.

A reclusive writer … Grace Donnelley’s successful sci-fi novel is about to become a movie. She wants a vacation with her mother before filming starts, but fears her name will cause a geek riot. So she creates Grace Ward, sometimes schoolteacher and doting daughter of Sunny.

A hounded actor … Bennett Oliver escapes London for a vacation with his mother. He wants to hide from the paparazzi and his brooding reputation. He takes the role of Ben Brady, successful businessman and overprotective son of Camille.

But they never counted on each other … An immediate attraction, aided by their matchmaking mothers, gives Ben and Grace a vacation they never expected — and one they don’t want to lose. Upon returning to their everyday lives, they work to maintain a relationship while trying to find a way to say “by the way, I’m famous.”

When the secrets and lies catch up with them, Ben and Grace struggle to open their lives and re-open their hearts to see if love can be their most treasured souvenir.

FBI profiler Jeff Crandall returned to Fiddler, Idaho, to work on new Bureau protocols in peace…and because he hasn’t been able to stop thinking about Abby Quinn. Kind, beautiful and quietly sexy, the petite rancher next door is loved by the entire town but keeps fiercely to herself. She’s a mystery that doesn’t want to be solved, though he’s desperate to try.

Whether that interest is professional or personal is a question he’ll sort out later.

Abby knows sharing her secrets would bring death and destruction to Fiddler. She survived her childhood, barely, but a long list of stepfathers weren’t nearly so lucky: their bodies are buried across the country, waiting to be discovered. The best protection is silence, anonymity and isolation, though the handsome agent next door seems hell-bent on destroying all three.

And he just keeps kissing her…

When Jeff is called in to investigate an interstate serial killer case spanning two decades, Abby knows it’s only a matter of time before he connects the dots, sees her for who she really is and walks away. But it’s when he’s standing in the crosshairs of Abby’s past that Jeff faces his biggest challenge yet: how to give the woman he loves the life she doesn’t believe she deserves.

This site uses Akismet to reduce spam. Learn how your comment data is processed.